Physical Mediumship (objective...being the object of perception of thought: belonging to the object of thought rather than to the thinking subject.)  involves the manipulation and/or transformation of physical systems and/or energies.  It is a sharing of time, space and energy between the Medium and the Spirit.

The Physical Medium offers the Spirit Operator vital, magnetic energy which it requires to make a direct impact upon the Earth Plane.  Since this form of Physical mediumship is relatively rare in occurrence and since it requires a tremendous expenditure of vital energy, if proper control is not maintained the Medium may "burn out" at an early age.  (Some Mediums have the ability to offer a materializing substance which the Spirit Operator can use for the purpose of manifestation.  This is called Ectoplasm. We are not going to explore Ectoplasm at this time.) 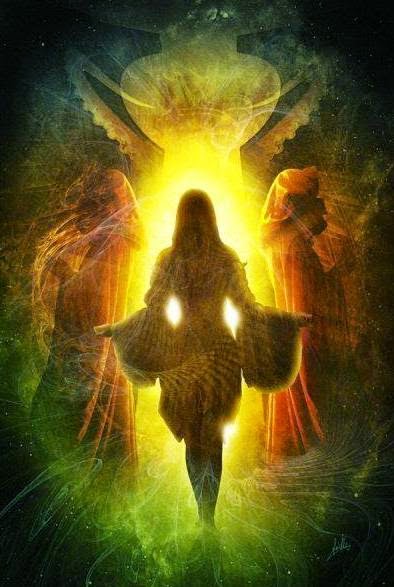 The alteration of the structure of an object to another vibrational frequency by mind power and mind control, i.e., to change structure and cause mutation and transmutation in matter, substance, energy and life itself.

The ability to change bare metals to gold and by using this same process, transform one's state of consciousness to a point where the alchemist can dematerialize his purified body and, at will, go from Etheric World Plane to Plane.

APPORTS:  Any living or inert object that appears from the air.  This can happen with or without the will of a Medium.  These objects are usually small...stones, flowers,, birds or live animals and plants.  Penetration of matter, such as walls, closed doors or windows, etc., is not an obstacle.  The objects may occasionally feel hot when touched. Some gurus, like Sai Baba have apported objects as gifts for their followers.

AUTOMATISM: To allow or to will Spirit to use part or all of one's body for automatic deep trance.

The body of the Medium is guided to each of these forms of Physical Mediumship.  If done in a Cabinet situation, Spirit will manifest a hand to use the typewriter or the telegraph key.  (Spirit has been known to rap out a message in Morse Code without the use of a telegraph key.)

Another example of Automatism is the Ouija Board.  It is a printed board which contains the letters of the alphabet, the number one through nine, a Yes and a No, Good-bye and a pointed planchette.  The people working the Board will place their fingertips lightly on the planchette which will move across the board spelling words, giving fates or numbers, answering "yes" or "no" questions.

(Little side note here ... One of the aunts that I lived with as a small child had one of the boards.  While some of the ladies in town had their bridge parties each week she, and the neighbor ladies,  had their "Ouija" party  Scared me pretty good on more than one occasion.)

DEPENDENT VOICE: The Spirit entity will communicate by using the Medium's vocal cords to bring forth messages.  It occurs in or out of a séance, but usually with a Medium who is in deep trance. Also called voice channeling.

DIRECT VOICE: The Spirit entity will communicate directly, independent of the Medium.  In a séance  situation  a trumpet is sometimes used for voice amplification. Direct is a term used for an isolated voice resounding in space without any visible source. Also called a disembodied voice.

DOWSING:   (A form of Radiesthesia)  refer to Pendulum

The use of a "divining rod", a forked rod or branch, usually of witch hazel, which, when held loosely in the hands is said to bend slightly when over a site where water, oil or minerals are situated.

(Side Note: My uncle, in 1936 on a farm in Iowa, and a few of his neighbors dowsed for our new well.   They found a great spot for the new well and it proved to be an excellent dowsing.)

To raise or elevate one's self or an object into the air for a time without the use of physical means.  It is willed and accomplished by concentration of the Sub-Conscious Mind and/or Guides.

This is accomplished by:

This phenomena is also associated with raising of tables on which several people may be sitting, by the Medium or Mediums placing their finger tips lightly upon the table and willing it to rise.

(Side Note: In one of our Development Circles, at Spirit of Allemeth in the early 1980s, we experimented with levitation by having one of the Circle participants stand in an open area and two of us would  place our fingers lightly on the shoulders and two under their arms.  We were successful in two out of four attempts.  We only managed to levitate them a few inches off the floor but we did it.  We were thrilled.)

A Pendulum can be made with a string or chain and a balanced, weighted object attached to one end.  The other end of the Pendulum is held between the thumb and index finger.  It is used to communicate between the Sub-Conscious Mind and the force fields around any object in the Universe.  It is used for personal questions, diagnosing disease, finding missing  objects or persons, detecting ghost energy fields, measuring the energy of food and other objects. ( I, personally, use a Pendulum with an amethyst crystal as the weight.)

Dowsing, (often called "water witching") is a method of divination for discovering water, metals and minerals, in or under the ground.  It is also used to discover inanimate objects, missing persons, and even to find lost keys.  Sometimes the dowser does not physically go to the location in question.  A map of the location is brought to him and he sets up a  number of small pendulums over the map which assist him in answering the inquirer's questions.  This procedure is known as tele-dowsing, indicating that there is the establishment of a telepathic link between the location in question and the map.  Prospectors have been using this in their search for gold for a number of years.

Dowsing is distinguishable from radiesthesia because Dowsing used for medical diagnosis is permitted in Europe and Great Britain but prohibited in the United States.  (my first introduction to the Pendulum was from my Chiropractor, Dr. Reba Willis, in Los Angeles in 1964 before my youngest son was born.  She and her husband were two of the first Chiropractors in California and had been arrested and thrown in jail on a number of occasions because they practiced Chiropractic.  She used the pendulum to select supplements and also to locate spinal problems.   She was an incredible lady!)

Dowsing dates back about 7,000 years.  It is known to have been practiced among the Egyptians and Chinese.  During the Middle Ages it was used extensively in Europe to discover coal and water.

Martin Luther condemned the practice as witchcraft which was equated to Devil-worship.  Dowsing practices, however, continued as a form of divination until the 19th century when science cast a dim light on it by proclaiming it invalid, "occult".

Within this past century dowsing has been applied in archaeological and geological work. Some dowsers are so sensitive that they can predict the depth at which the well or reservoir lies underground and the amount of water or material that it is capable of supplying.  In 1930 the term "radiesthesia" was coined by Abbe Bouly in France where the rod gave place to the small pendulum used as an indicator.

The current practice of using radiesthesia, in the detection of illnesses and prescribing their treatment, subtle indications from the pendulum's oscillations are obtained by placing the pendulum either over the area that is afflicted or over a "witness".  The "witness" can be a sample of hair, saliva, blood or a picture.

There is considerable literature on the subject of radiesthesia which endorses the reliability of the phenomena.  Well worth investigating further.

PSYCHOKINESIS:  (PK)   Mind concentration...mind over matter.  The production of motion in physical objects by the exercise of psychic or mental powers.  (Uri Geller is perhaps the best known medium who possesses psychokinetic powers.)

The ability to affect objects and the material course of events by changing the form, position or elements of an energy field with the Conscious and Sub-Conscious Mind, without the use of the motor system (glands and muscles) of the body.

PK is the counterpart of ESP.  Together they make up the communication or exchange that a person may have with his surroundings in the form of experiences that are called "psychic".  This communication is better known as Parapsychical or PSI behavior and the study is called Parapsychology or Psychical Research.

The theory of PK states that "the world and everything in it is made and held together by man's thoughts, which give it form and energy".

TELEKINESIS:  (TK)  (Gr...tele, "over a distance", kinesis, "movement") Phenomena performed by Spirit to move and manipulate matter.  The movement of objects by scientifically inexplicable means.

The ability to change position, form or elements of third dimensional matter, performed by Spirit, through a Medium in semi or deep trance.

In Telekinetic Psychism, the Medium is usually not aware of what is happening while it is happening.  He/she has programmed the movements or changes before going into trance.

TK is usually grouped into the two categories of non-human and human.