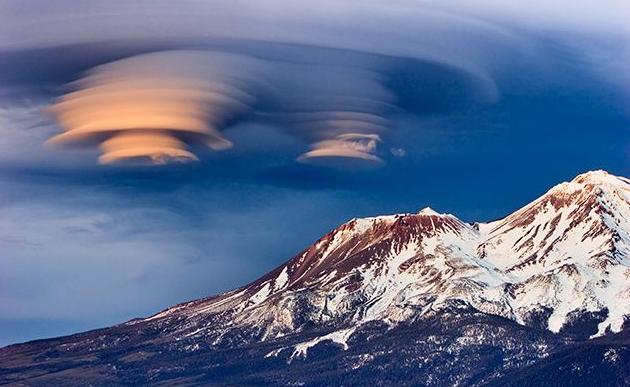 My Visit Inside the Mystical Mount Shasta

The Mt. Shasta story begins 6 months prior to my being taken inside the Mountain. We (my husband, his son by a prior marriage and our two small children ages 2 and 4 and my Siamese cat, Pixie) had packed everything we owned into a U-Haul trailer and moved from the desert to the mountain. A friend of ours and his family had preceded us by about a week, and when we arrived at Mt. Shasta, we dropped the U-Haul at his place and headed up the mountain to camp overnight.

We stopped at one campground and got out to set up camp. The energy of the campground just didn't feel right so we got back into our truck and headed further up the mountain. We turned into Panther Meadows and decided to camp there. As we unloaded the truck, I discovered my Siamese was gone. I was devastated. We went back to the first campground but couldn't find him. I called and called - but to no avail.

We went back to Panther Meadows and spent the night. It was really cold as it was the spring of the year, and we had a really nice fire going to stay warm. I put the boys in the back of the pickup (we had a homemade camper shell on it which kept out the chilling wind), packed them in lots of blankets so they were toasty warm. My husband joined them, and I sat by the fire most of the night, keeping it going and hoping Pixie would show up. Our little campsite was ringed with the bright, inquiring eyes of the nocturnal animals who showed up to inspect us. It was an inspiring, goose-bump-making sight.

Next morning we headed back down the mountain to our friend's house. He took us to a local hotel and introduced us to "Mother Mary" (as she was lovingly called by the many who sought her wisdom) who owned the hotel-restaurant. When she discovered we had not found a place to live yet, she took us upstairs and set us up in the two-room suite which I greatly appreciated. It gave us a chance to shower, etc., and a place for the boys to be warm and comfortable. As the days passed, we found a house and got settled in.

Each weekend (and many weeknights), we spent time at Panther Meadows, and I never gave up looking for Pixie. My husband and the boys did a lot of exploring which left me at the campsite alone a good share of the time. Occasionally, hikers and other campers would stop by the campsite, and we would talk ,and they would share the pot of coffee I always had going or the water we had with us.

Several weekends, we trudged up to the lodge and slept there overnight. The lodge burned down several years after we left. It was reported to have been arson. It was a shame because the lodge offered shelter to the weary hiker and mountain climber, and it had so much character. There was even water available there. Six months after we arrived in Shasta, we were once again at Panther Meadows camping out for the weekend.

We arrived late Friday night, set up camp, got the fire going, had our dinner and just sat back and enjoyed the sky. The boys really loved the spot and could hardly wait to enter the forest for more adventurous exploring in the morning. As usual, our resident audience ringed our campsite with those bright inquisitive shining eyes. It was warm enough then that we slept outside the camper in sleeping bags, but I seldom slept when we were up there. I almost felt it would be rude to go to sleep with so many friends around us, and I liked to keep the fire going so we could have hot coffee and breakfast early in the morning. I never seemed to get sleepy up there.

This particular weekend was the weekend I was taken inside Mt. Shasta.

My husband and the three boys had gone exploring again, and I was in the process of cleaning up the breakfast mess and getting the sleeping bags put away when I noticed a young man (I assumed he was another young hippie, doing his thing on the mountain as so many were) walking across the meadow toward our camp site. He was a slender  young man, dressed in the fashion of the day, jeans and shirt. He had no backpack or canteen with him. I thought he must have a campsite nearby and had left his things there while he did a little exploring close by.

As he got closer to the camp, I saw that he was blond and had a neatly trimmed little beard. I chuckled to myself because he didn't appear to be old enough to be able to grow a beard. He stopped a short distance away and asked if it was O.K. if he might have a cup of the coffee he had been smelling all morning. I laughed and invited him into the campsite and got him a cup of coffee. We sat by the fire for a while and talked about the mountain and the weather and several inconsequential topics, which I can't even, remember now. I was drawn to the young man, felt perfectly safe with him - even was comfortable with him as if I had known him for years.

It seemed we shared so many interests and beliefs. We talked about Paramahansa Yogananda, eastern philosophy, magnetic and color healing, dreams of flying, Atlantis and even got around to talking about UFOs. I told him about George (JW George Van Tassel, that is.) and the Integratron and discovered he knew all about George. I told him that George had told me about the Brotherhood that had been in Shasta and that they had left to go to Peru because they needed a more stable environment, etc. He smiled and said he had also heard those stories. He asked if I would like to go inside the mountain to see for myself who was still there.

Thinking he was kidding me, I said sure, would love to do that. It sounded really exciting. We got up and started off in the direction he had come from. He said the entrance  was nearby, and it would only take a few minutes to get there. He was right - it did only take a few minutes. We passed across the Meadows into the trees, and within minutes, we were at a tall, odd shaped rock. I would guess it was probably 10 feet high and 5 feet across. The front of the rock was flat, and the limbs of the nearby trees partially hid it. The top of the rock slanted down to the ground in the back so that it looked like a lopsided triangle.

I remember that the ground around it was very hard compared to the softer ground we had walked on to get there. There was no layer of fallen needles, etc., to cushion our steps. He walked up to the door and touched it. It swung open, inwardly, at his touch. He motioned me to follow him, which I did. I marvel now that I was not in the least bit afraid to go with him nor did it even occur to me not to go with him. 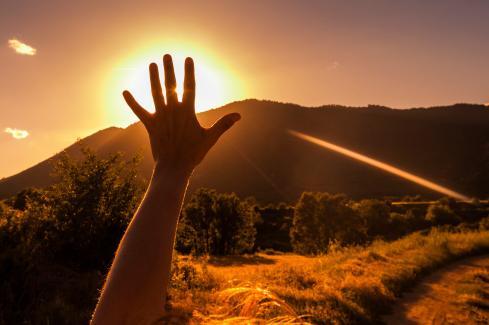