If we are fortunate, there will always be new theories and/or concepts on mediumship and especially the aspects of healing for us to explore.  The posts I have given you on this site are designed basically to introduce the beginning seeker to some of the varied energies that surround us.    If you should find yourself becoming more open to receiving and internalizing new thought possibilities, a whole new landscape will unfold for you.  A search for more knowledge and experience can be done solo,  but I would suggest you find a good Development Group or Reiki Healing Circle and get started.

On this page, I am including a few aspects that are a combination of Mental and Physical Mediumship and several connected aspects that stand on their own. 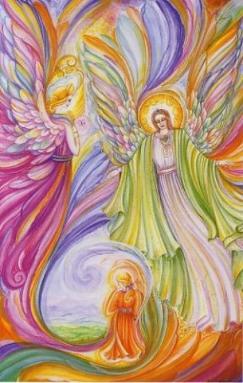 Psychic Healing encompasses all forms of "unorthodox" healing methods and therapies that use a psychic principle.

Spiritual Healing encompasses any type of healing carried on in a Church or religious gathering or by a Practitioner who learned the healing technique in a spiritual setting.

Below is a brief list of several different forms of Healing:

Laying on of hands:

(Note here...we had a Healing Group that met once a week on Thursday evening. We worked as a combined healing energy and also worked as an individual. The individual healings were done in the circle with one healer working on one individual.  When all of the individual healings had been done, the group began its work on the at-a-distance requests for healing that had been received.  Many of these requests came from individuals living in other countries.  We received inspiring feedback from them with the results of our work.  Most gratifying to be able to help,)

A system of concepts, incantations, ceremonies, symbols, rituals, etc. to stimulate the more subtle forces of nature to obey requests or demands.

Homeopathic or Imitative Magic, (the symbol of a thing is the thing)  i.e., healing someone by sending energy to a picture of that person.

Contagious Magic (West Africa),  Using  something (fingernail, hair, clothing, etc.) that belongs to an individual in order to contact or influence that individual

Two of the basic laws of Magic are:  (hermetic):  "As above, so below" and "Respect nature and have control over it". A third and very important one is, "Whatever you create for others first lives in your life."

A direct communion with the Ultimate Reality.  A belief that spiritual truth (knowledge of God or the Divine) can be attained through intuition or illumination that is totally removed from ordinary sense perception.  The belief in mysticism is the belief in a supreme, all-pervading power.

SHAMAN:  (Medicine Man - He or She who knows)

Shamanism is a range of traditional beliefs and practices that involve the ability to diagnose, cure, and cause change.  These traditions have existed throughout the world since prehistoric times and are thought to predate all organized religions.  Shamans are said to interpret dreams, utilize astral projection and travel to upper and lower worlds.  They are sometimes referred to as Witch Doctor but Medicine Man is preferred.

Today, Shamanism survives primarily among indigenous peoples.  Shamanic practice continues in the tundras, jungles, deserts, and other rural areas.  It is once again being seen in cities, town, suburbs and shantytowns all over the world.

(Note here ... Recently efforts have been made to establish a link between Shamanic practice and knowledge with Western scientific beliefs.  It has been proposed that shamans attempt to take their consciousness down to the molecular level to work with DNA.  This action, "holomovement theory" is being perceived as creating a scientific foundation for such new age concepts as parallel worlds and alternative means to traverse time and space.)

A doctrine that one can see into the Invisible World and can train him/herself to communicate with the Life Force to learn the laws of the invisible world to bring healing into being.

This deals with an animal's innate ability to communicate with other animals, humans, plants, minerals and other aspects of nature.

APPARITIONS:  A super-normal appearance which suggests the actual presence of a person, living or dead.  Apparitions usually appear with a warning of impending danger or death of someone closely connected to the recipient.  It usually delivers an urgent message of extreme danger, worry, illness or death.

DEJA VU:  (Fr..."already seen): That sense of familiarity associated with a current scene and/or the feeling of having "lived through" the same sequence of events in an identical manner at some previous time.

Parapsychology states:  to meet an individual or visit a location that one has visited or met in a previous incarnation or to experience the same "emotional sensations" from a situation or person that one experience in another lifetime or the past of this lifetime.

Hans Holzer observed that:  "A person has an impression about a situation, a place or a person precognitively.  When the actual event becomes an objective reality, it all comes back in a sudden flash.  You realize that you have seen the situation before, but at the time you first saw it, you didn't realize that you did.  The original impression was on the  unconscious level.  It is as if you had made a prediction, had forgotten all about having made it, and when the event occurred, realized you had made that prediction and then recalled it".

The ability of stones, gems and minerals to communicate with their environment, plants, animals and humans. Minerals are attuned to auras, possessed with sensibilities and powers to be governed by sounds and the mind and emotions of humans. They bear some relationship to gravity, electricity and magnetism and possess similar chemicals as the human body.

Stay tuned to hear about The Association of Animals in Mediumship